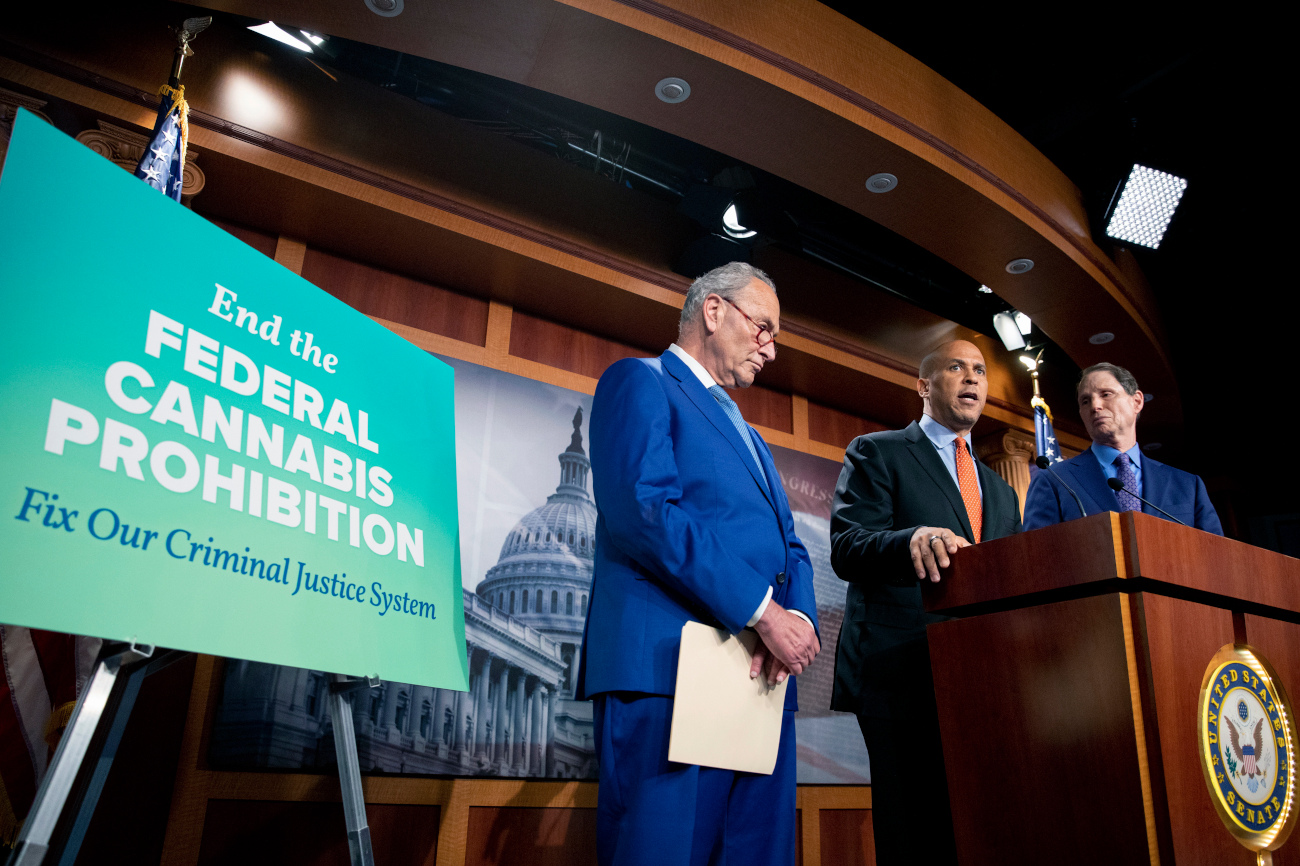 Upon introducing the legislation, Sen. Schumer said: “This is monumental because at long last we are taking steps in the Senate to right the wrongs of the failed war on drugs. … I will use my clout as Majority Leader to make this [legislation] a priority in the Senate. … It makes eminent sense to legalize marijuana.”

“The days of federal prohibition are numbered,” said NORML Executive Director Erik Altieri. “These actions by Senate Majority Leader Schumer and Senators Booker and Wyden reflect the fact that the supermajority of Americans are demanding that Congress take action to end the cruel and senseless policy of federal prohibition. It is time for legislators to comport federal law with the laws of the growing number of states that have legalized the plant, and it is time for lawmakers to facilitate a federal structure that allows for cannabis commerce so that responsible consumers can obtain high-quality, low-cost cannabis grown right here in America without fear of arrest and incarceration.”

NORML Political Director Justin Strekal added: “Our main priority is to ensure that Americans who choose to responsibly consume cannabis are no longer discriminated against under the law. “With one in eight Americans choosing to consume on a semi-regular basis, including nearly one in four veterans, we must end the practice of arresting over 500,000 Americans every year and denying countless others employment, housing, and other civic rights if we are truly to be the ‘Land of the Free’. The federal government can take great strides toward rectifying this situation by advancing the Cannabis Administration and Opportunity Act through the legislative process.”

Specifically, the Cannabis Administration and Opportunity Act directs the US Attorney General to remove marijuana from the federal Controlled Substances Act — thereby allowing states to either maintain or establish their own cannabis regulatory policies free from undue federal interference. Under this scheme, state governments – if they choose to do so – can continue to impose criminal penalties for marijuana possession offenses. However, states would not be permitted to prohibit the interstate commerce of legal cannabis products transported through their borders.

“I am proud to introduce our discussion draft of the Cannabis Administration and Opportunity Act, a legislative proposal aimed at finally putting an end to the federal prohibition of cannabis and addressing the over-criminalization of cannabis in a comprehensive and meaningful way,” said Majority Leader Schumer. “The War on Drugs has too often been a war on people, and particularly people of color. Not only will this legislation remove cannabis from the federal list of controlled substances, but it will also help fix our criminal justice system, ensure restorative justice, protect public health, and implement responsible taxes and regulations.”

The proposal also mandates for the expungement of the records of anyone convicted of a federal, non-violent marijuana offense. The expungements must take place within one year of the law’s enactment.

The Act also forbids federal officials from taking discriminatory actions against those who legally use cannabis. It prohibits “individuals from being denied any federal public benefit … on the basis of [the] use or possession of cannabis.” It also, for the first time, permits physicians associated with the US Department of Veterans Affairs to make recommendations to their patients to access medical cannabis.

The proposal transfers primary agency jurisdiction over cannabis regulation from the US Drug Enforcement Administration to the Food and Drug Administration and to the Alcohol and Tobacco Tax and Trade Bureau in a manner similar to the ways in which these agencies already oversee alcohol and tobacco products. A federal excise tax of 10 percent would be imposed within the first year of the law’s enactment. Medical cannabis access programs, which are operational in the majority of US states, would not be disrupted under this federal plan.

“Cannabis prohibition, a key pillar of the failed War on Drugs, has caused substantial harm to our communities and small businesses, and especially for communities of color,” said Senate Finance Committee Chair Wyden. “It’s as simple as this: Senators Booker, Schumer and I want to bring common sense to the federal government, end prohibition and restore the lives of those hurt most and set them up for opportunity.”

“For decades, our federal government has waged a War on Drugs that has unfairly impacted low-income communities and communities of color,” said Senator Booker. “While red and blue states across the country continue to legalize marijuana, the federal government continues to lag woefully behind. It is time for Congress to end the federal marijuana prohibition and reinvest in communities most impacted by the failed War on Drugs. I am proud to introduce this landmark piece of legislation with Senator Wyden and Majority Leader Schumer that will finally turn the page on this dark chapter in American history and begin righting these wrongs.”

Pending language in the US House of Representatives, the Marijuana Opportunity, Reinvestment, and Expungement (MORE) Act of 2021, similarly removes (deschedules) cannabis from the CSA and facilitates the expungement of past federal marijuana-related crimes. House lawmakers passed a previous version of the MORE Act in December by a vote of 228 to 164, marking the first time that a chamber of Congress ever advanced legislation to end the federal prohibition of cannabis. Senate lawmakers, however, failed to take up the bill.

Senators are seeking feedback on the draft legislation through September 1. Public comments may be provided to Cannabis_Reform@finance.senate.gov. In an interview with the publication Politico in April, Sen. Schumer pledged that he would hold a floor vote on the bill “sooner or later” this term. The Senate has never held a floor vote on legislation pertaining to descheduling cannabis.

For more information, contact Justin Strekal, NORML Political Director. NORML is also soliciting public feedback on the legislation, which may be provided here.