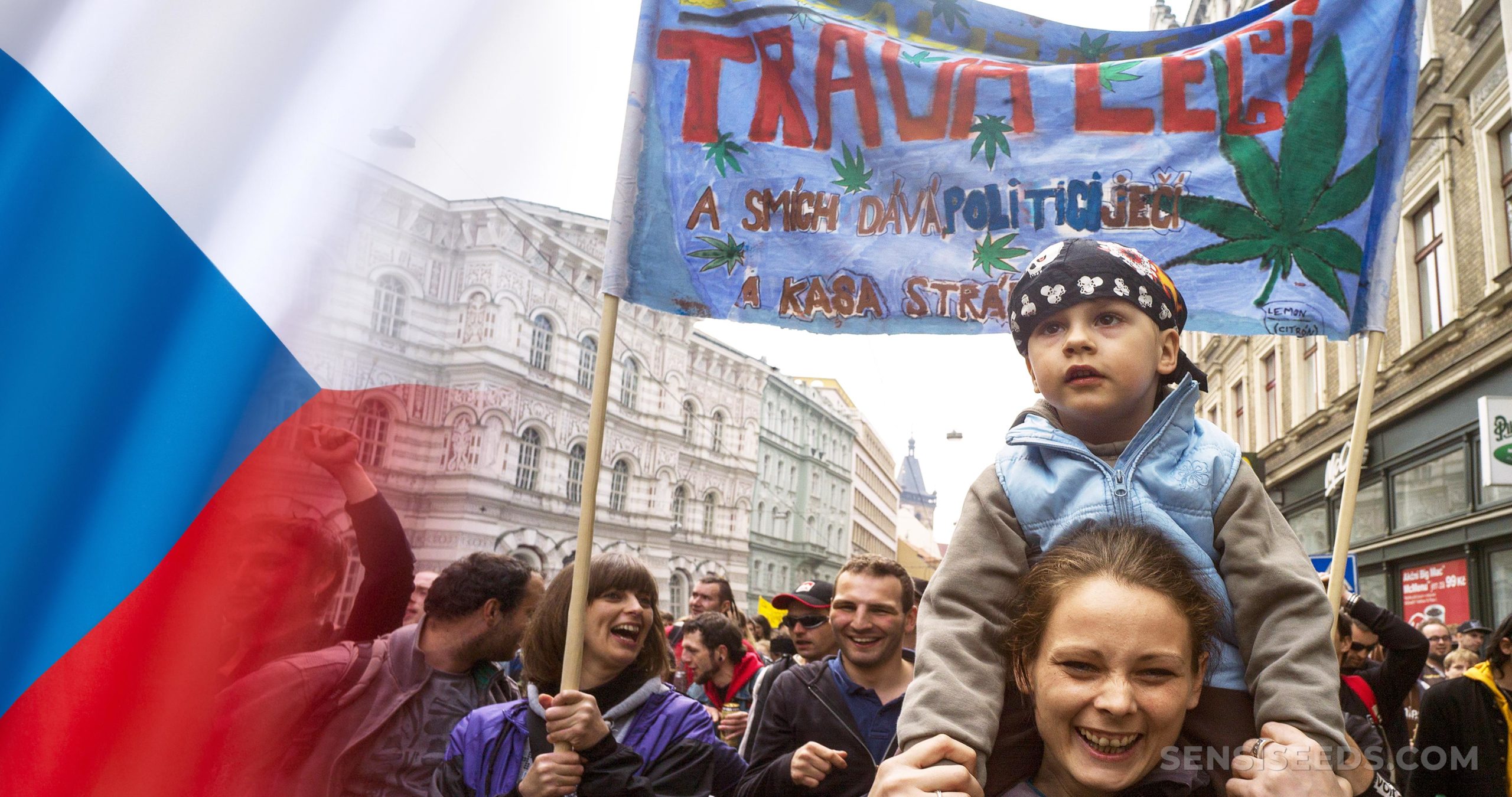 In a small farmstead near the eastern Czech city of Pardubice, Pavel* is tending to his garden.

For the past few years, Pavel has grown five cannabis plants in his greenhouse, the legal limit that Czechs are currently allowed to grow at home for personal use.

But he’s recently invested a few hundred euros in new equipment to allow him to plant ten times as many plants. It’s a crime today but one he hopes won’t be soon if there is a change of government in October.

“It’s a small investment, and I don’t expect to make a fortune, but I know how to grow [marijuana] and I want to make some money from it,“ Pavel says.

Presently, the state only provides a few licences to larger-scale growers who sell their produce to the medical marijuana sector, which has been legal since 2013.

Selling home-grown cannabis for recreational use is strictly illegal.

Like many cannabis-enthusiasts Pavel is a supporter of the opposition Pirate Party, which has long campaigned for legalisation and, according to opinion polls, could give the current ruling coalition a run for its money at October’s ballot.

If they win power, the Pirates have vowed to fully decriminalise marijuana production and use within two years.

A study by the European Monitoring Centre for Drugs and Drug Dependency in 2016 found that the Czech Republic had the largest number of young cannabis users in Europe, with just over a fifth of Czechs aged 15 to 34 admitting to using the drug at least once. By one estimate, at least 550,000 Czechs grow cannabis at home for personal use.

Even at the moment, Czech legislation of marijuana is “more benevolent” than most other countries in Europe, said Jan Vit, chairman of Konopa, a non-profit organisation that works with educating people about marijuana.

Possession of fewer than 10 grams of marijuana and growing five plants at home has been decriminalised since 2010, although it remains a civil offence and can be punished by a fine of around €580.

However, possession of more than 10 grams remains a criminal offence, and selling marijuana carries a prison sentence of between 2-18 years.

For people like Pavel, the current rules create a dilemma. He wants to give some of his home-grown weed to friends but that would be a criminal offence.

If he doesn’t, they have to go to local drug dealers, where they not only pay over the odds for less-than-ideal produce but are often offered stronger narcotics.

‘Cannabis is a legal field crop’

Tomas Vymazal, an architect of the parliamentary bill defeated in January and a member of the Pirate Party, has argued that allowing home-growers to “give” cannabis to friends for free would end much of the black-market trading, as well as needless criminal charges for small-time growers.

Current laws also put buyers at more risk of associated crime as well as access to other drugs. This is a considerable concern in the Czech Republic, where problematic use of more dangerous drugs, notably methamphetamine, is high.

Because small-scale growing is decriminalised but remains a civil offence, home-growers do not get licenses from the authorities, which reduces the possibility of taxing and regulating them, the Pirate Party also argues.

Drug reform is gaining pace across Europe. Last September, the Swiss parliament amended a federal drug law to allow local pilot trials of legal production and sale of cannabis for recreational purposes. Long-standing plans to legalise non-medical production were put on hold in Luxembourg because of the COVID-19 pandemic. Parliamentarians in France have also recently demanded reform.

A survey carried out by the local Czech newspaper Prazsky Denik last October found that 54% of respondents said they had used cannabis products and 52% were in favour of legalisation.

Amid this debate over where legalisation should start and decriminalisation end, Vit, of Konopa, is at pains to reiterate that “cannabis is a legal field crop” in the Czech Republic today.

Indeed, buying cannabis seeds is perfectly legal. Products made from hemp, a variety of the cannabis plant, are legal to sell, although the Czech Republic currently lacks the processors to make hemp textile production a serious industry, said Vit.

Cannabis takes around eight months to grow, so we’ll know the results of the election by then

Moreover, the country is experiencing a boom in medical marijuana. The State Agency for Medical Cannabis, a government body, reported in January that 67 kilograms of medical cannabis were prescribed by doctors last year, up from 17 kilograms in 2019 and less than 5 kilograms the previous year.

Medicinal cannabis has been legal in the Czech Republic since 2013, although the law was only changed two years later to allow for domestic production. Growers must receive a licence from the State Institute for Drug Control (SUKL), a government agency, and only can sell their cultivation to the same organization.

The significant increase in 2020 is a result of a change of law last year that now allows health insurance companies to cover up to 90% of the price of prescribed medical cannabis, SUKL has commented in local media.

In fact, on the same day in January that parliament rejected a bill to further decriminalise marijuana possession, it approved a government-sponsored bill to make medical cannabis more affordable and accessible.

Much of the debate comes down to how cannabis is grown. Medicinal marijuana is high in cannabidiol (or CBD), a compound that numerous studies contend reduces physical pain and anxiety. However, it is low in tetrahydrocannabinol (THC), the psychoactive compound that gives users a “high”. Getting a cannabis plant to produce high levels of THC or CBD depends on how it is grown.

State-sanctioned growers can produce and sell as much cannabis as they want to the state authorities, but it must be low in THC. No more than 0.3% is allowed.

Some advocates of drug reform want to open up the medical marijuana industry so that it is easier to sell CBD-rich cannabis to state agencies or direct to consumers. Demand for CBD-rich skincare and health-food products is booming across Europe.

According to Vit, current laws that restrict the number of state-licensed professional companies that sell cannabis to the medical sector could increase speculation and competition among these firms. “A ‘war’ will certainly break out over control over production,” he added.

Other advocates of reform want the entire industry legalised, allowing people to grow as much cannabis as they want without criminal punishment, but with regulation in terms of sales.

The newly-formed coalition between the Pirates and the Mayors and Independents party proposes something of a middle-ground.

“We will abolish criminal sanctions for the [production] of cannabis and cannabis products,” states the Pirate and Mayors manifesto, though they are likely to maintain some civil charges, such as fines levelled against growers who do not receive official licenses and those who violate new regulations.

According to the manifesto, legalisation will allow the authorities to better regulate the industry, saving the state considerable money, such as from not having to investigate and prosecute petty cultivators.

The party reckons that current bans on cannabis production and distribution cost the government about €58 million per year, an estimate based on 2007 data. And an additional €171 million will be generated each year through a new indirect tax on commercial production.

“If this new regulation passes, it will allow any person to obtain the licence and become a grower, even for export. This means legalisation of medical cannabis production and does not limit the scale of that,” explained Hana Gabrielova, president of the CzecHemp, an association for the hemp and medical cannabis industry.

However, Gabrielova added, the Czech Republic is unlikely to see the rise of industrial cannabis production on the same scale and profitability as the United States, at least not in the short term.

In the US, the marijuana boom was in large part because of the creation of “dispensaries”, local government-regulated stores where cannabis is sold for medical or recreational use. Even eight years after medicinal marijuana was legalized in the Czech Republic, it still doesn’t yet have anything like that system, said Gabrielova.

Instead, pharmacies provide patients with their medical cannabis after prescription from doctors. “We should bear in mind that medical and political systems are very different in the US and the Czech Republic, so it is hard to compare the two cases,” Gabrielova added.

In terms of recreational use, proposals by the Pirate coalition, as well as other political parties, are hazier.

For those who want the high-inducing THC cannabis, a network of small-time growers would be able to face no criminal charges in providing their produce for free to friends and family.

However, the Pirate’s manifesto says legislation would be drawn up to help municipalities and city districts regulate how “cannabis shops can be and where they cannot” set up, a system that would seemingly replicate the US “dispensaries”.

According to Petr* drug reform in the Czech Republic is likely to happen in the coming years, even if the Pirates don’t win in October, due to the changing nature of the industry.

Like many others, Petr has also recently invested in the equipment to plant more than the currently permissible five plants at home in anticipation of October’s election. And he has plans to turn most of his land, at his home not far from the city of Olomouc, into a large greenhouse for production come the end of 2021.

“Maybe the Pirates will win. Cannabis takes around eight months to grow, so we’ll know the results of the election by then,” Petr said.

Up until the beginning of July, the Pirates and the Mayors coalition was ahead in the opinion polls. But Prime Minister Andrej Babis’ ANO party, the largest partner in the current coalition government, has recently taken a slim lead, according to latest surveys by STEM, a local pollster.

Even still, it is generally believed that October’s election will be a tightly fought race and the outcome will largely depend on how the dominant parties can negotiate coalition deals with other groups.

“Legalisation of cannabis is one of the Pirates’ long-term priorities,” the manifesto reads. “If we are part of the new government of the Czech Republic, we will enforce legalisation quickly. But if we end up in opposition again, it will be very difficult.”

For some cannabis enthusiasts, investing now is a risk worth taking.