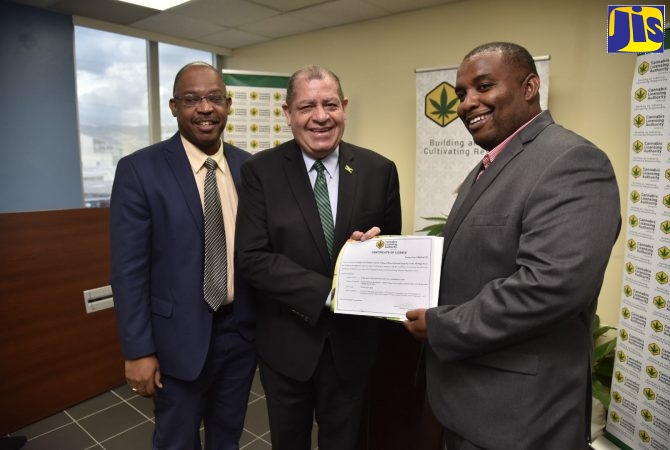 Cannabis Licensing Authority marks the Issuance of its 50th Licence

The Cannabis Licencing Authority (CLA) is celebrating the issuance of the fiftieth (50th) licence for the handling of ganja in Jamaica.

The Authority hosted a ceremony on Wednesday, December 4 to celebrate the issuance of the licence to Outlier Bio-pharma Limited. The licence was formally issued on Friday, November 13 and was followed by three (3) more in the month of November, bringing the total number of licences issued by the Authority to fifty-three (53) as at November 30, 2019.

Speaking at the event Chief Executive Officer at the CLA, Mr. Lincoln Allen, said “this fiftieth licence is symbolic” highlighting that the journey continues and the CLA is committed to the process. He added that the licences issued have added four hundred and forty (440) jobs to the economy directly since issuing its first licence just over two (2) years.

In his remarks, Minister of Industry, Commerce, Agriculture and Fisheries, the Honourable Audley Shaw, noted that the CLA’s growing application pool is a testament to the industry’s appeal and profitability; “The good news, beyond these licences that are being issued, is the interest (in Jamaican ganja) continues to be vibrant”.

Since the beginning of the Financial Year (April to November 2019), trading among licensees is valued at just under ninety thousand US dollars (US$90,000) not including sales to the end-user at retail facilities.

The Authority has also issued over two hundred and fifty (250) Conditional Approvals, which means the applicants are deemed as fit and proper to be part of the industry can begin to build out their facilities to be licensed.

In accepting the licence, the Director of Outlier Bio-pharma Limited Mr. Brian Thelwell said his dream has come through and now the hard work truly begins. He encouraged all Jamaicans with a dream to follow through on them.

About the Cannabis Licensing Authority: The CLA, which was created by the Dangerous Drug Act, has powers to make and oversee the implementation of regulations for licences, permits and other authorisations for the cultivation, processing, distribution, sale and transportation of ganja, for medicinal, scientific and therapeutic purposes.

About Jamaica’s UN Drug Treaty Obligation: Parties to the 1961 Convention undertake to limit the production, manufacture, export, import, distribution and stocks of, trade-in and use and possession of the controlled drugs so that they are used exclusively for medical and scientific purposes. The production and distribution of controlled substances must be licensed and supervised.